Sit Down With Summer Jobs and Mayor’s Youth Council Superstar 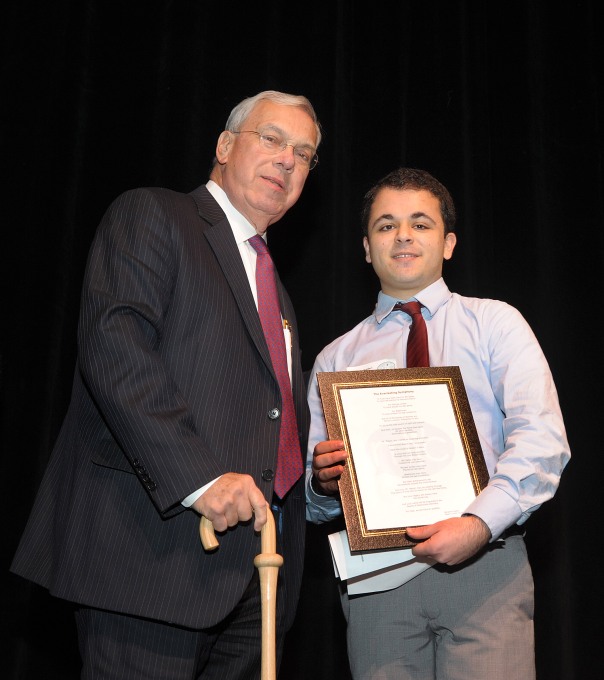 When BBA President Paul Dacier and Executive Director Rich Page attended the 20th Anniversary Celebration of the Mayor’s Youth Council (MYC), they saw a familiar face introducing Mayor Thomas Menino. That face was Ben Haideri’s, who represents his community of Roslindale on the MYC and interned at the Suffolk District Attorney’s Office through the BBA Summer Jobs Program last summer.

Beyond the Billable sat down with Ben to talk to him about his experiences with the MYC and BBA Summer Jobs Program.

We started by discussing Ben’s experience at the Dorchester District Court Branch of the Suffolk DA’s Office — where he spent most of his summer (you may remember him from this article). As an aspiring lawyer, he felt that the courtroom experience would be particularly valuable:

“I spent a lot of time in the courtroom watching trials. One of the trials lasted two days, and I decided that I would write a closing statement just for fun. I gave it to the prosecutor to review and she ended up using a chunk of it in her closing statements.”

While finishing up his senior year at Boston Latin Academy, Ben is also enjoying his second year serving on the MYC. As a representative, Ben participates in two meetings each month, identifies issues affecting his community, such as integration, and works with other representatives to brainstorm solutions. When we asked him to tell us a highlight from his time on the MYC, he mentioned his speech about the important of getting youth involved in government. It’s probably worth mentioning that the speech was given in front of 3,000 people, including mayors from across the country, at the National League of Cities Conference.

Ben is waiting to hear back from colleges and hopes to study political science before going on to attend law school. “I came into the BBA Summer Jobs Program knowing that I wanted to be a lawyer and the experience solidified it. Through the Mayor’s Youth Council, I gained experience with outreach, writing, and giving speeches. These skills are important because you need to be a good communicator to be an effective lawyer.”

It’s also worth noting that Ben’s position was funded thanks to contributions to the Boston Bar Foundation, which provided funding for 13 positions for Boston Public High School students to work at nonprofit organizations, government agencies, and courts last summer.

The Boston Bar Association, which also goes by the acronym BBA, is a volunteer non-governmental organization in Boston, Massachusetts.
View all posts by BostonBar »